From the original Abbey Rd Pedestrian Crossing Belisha beacon post
With Provenance, more info in the description below, also see gallery of images roadworks with the actual post clearly shown

The roadworks meant fans of the Fab Four, who flock to the spot from across the world, had to contend with diggers and trucks spoiling the scene

The crossing, just outside Abbey Road studios where the Beatles recorded much of their acclaimed output, is thought of as a Mecca by fans of the music legends.

It was given Grade II listing in 2010, 41 years after featuring on the cover of the Abbey Road album.

But fans need not worry, the roadworks, which saw the original tamac ripped up then relaid and the lines repainted, finished today.

The Red Hot Chilli Peppers once staged the shot naked but for strategically placed sports socks.

It was given Grade II listing in 2010, 41 years after featuring on the cover of the Abbey Road album. 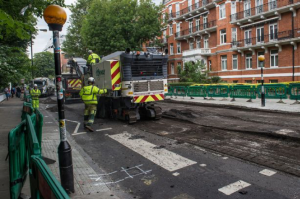 Copyright Fenori Ci (UK) Ltd 2022 - All Rights Reserved
Back To Top
Brought to you by WisdmLabs: WordPress Development Experts